MALVERN, Pa. — One summer day in 2017 after finishing a bike ride, Glenmoore, Pennsylvania, resident Doug Thompson got home and began reading the latest issue of Bicycling. The magazine laid out a harsh reality: 50,000 bicycling accidents and 1,800 fatalities per year in the United States. Most cyclists hit by cars were struck from behind, never seeing what was coming. The numbers were much higher than what Thompson, an avid cyclist, would have expected.

Another statistic jumped out at Thompson, too: If cyclists were to add lights to their bicycles, it would significantly reduce their chances of getting hit, even during the day. Thompson inspected the rear light on his bike — small and nested on the seat post. Most other bicycle models had similar light placement. Yes, the rear lights helped increase visibility, but could more be done?

Then, it hit Thompson: Three lights.

“When you approach the rear of a car, there are two taillights and then the center light. It gives you depth perception and it also gets your attention,” Thompson said. “I started sketching … [and] I got to this point where I started looking at the seat post and the seat rails. It hit me that no one was doing lights that attached to the seat rails and came out from behind the rider, bringing the lights closer to the car.”

After a trip to a local craft store, Thompson cut pieces of foam core and glued them together to create an initial model of "The TailWin!" which he attached to the back of his bike and tested. One of Thompson’s entrepreneur friends referred him to a designer in Colorado, who 3D printed a prototype.

Thompson pitched The TailWin! at the West Chester University Business Idea Competition earlier in the year and was eager to continue sharing and promoting his idea. When he learned about Penn State Great Valley’s Lion Cage pitch competition through the Ideas x Innovation Network (i2n), he jumped at the opportunity.

Lion Cage is held through Penn State Great Valley’s REV-UP Center for Entrepreneurship, which offered participants the opportunity to practice their pitch and receive feedback from Leo Daito, REV-UP entrepreneur-in-residence, prior to the event.

“I got some really good insights from Leo during my prep,” Thompson said. “I listened to his feedback and I made adjustments and it really worked well for me during the actual presentation.”

Each presenter has five minutes to pitch their idea, followed by a question-and-answer session with the panel of judges. Thompson gets energized from public speaking, and the Warren V. Musser Auditorium in which the event was held — an amphitheater-style room that seats 400 — was the perfect venue.

Thompson was thrilled when he won second place. 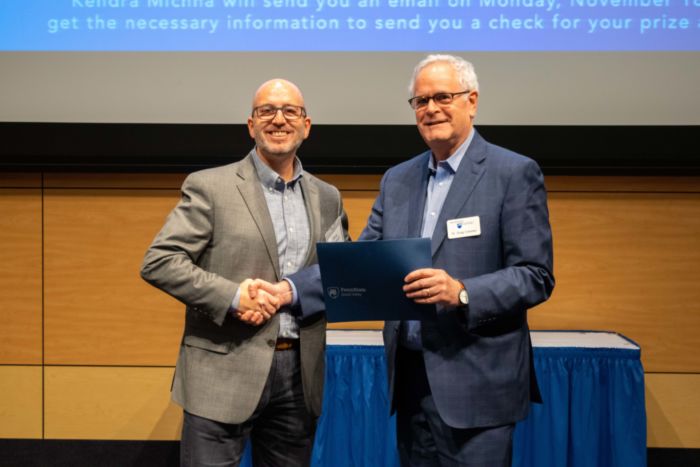 After Lion Cage, Thompson posted about his experience and The TailWin! on his LinkedIn page. As the word spread through his network, a friend introduced Thompson to local marketing experts who have proprietary technology that can further advance The TailWin! and increase cyclists’ visibility to drivers.

Ideally, Thompson said, he would like to reach a licensing agreement with a major bike company so The TailWin! can be widely available for consumers. He said he also envisions potentially starting a crowdsourcing campaign so potential buyers can pledge to purchase The TailWin! without the need for mass production.

Regardless of how the product is produced, Thompson sees a bright future for The TailWin!, especially given the rapid growth rate of bicycle traffic in the Greater Philadelphia region.

“This product was never money-motivated,” Thompson said. “What’s more important for me is to see it in production, to see people have these bike lights on their bikes and not get hit by cars and not be injured.”