MALVERN, Pa. — Nasr Mustafa, a Master of Engineering Management student at Penn State Great Valley, was the only person from his home country of Oman to receive a Fulbright Foreign Student grant this year.

Born and raised in Muscat, Nasr’s background is well-suited to his studies. His mom is a banker, his dad a businessman, and other family members work in the oil and gas industry. After working several jobs during the summers, Nasr decided to pursue an undergraduate degree in engineering.

“I was inspired by working at my grandfather’s construction company,” he recalled. “I used to help out with the automobile garage — tinkering with cars, watching the mechanics work on trucks. My cousins and I tried to rebuild a go-kart from a used frame, and the project ended horribly!”

He attended Queens University in Kingston, Ontario, and graduated with a bachelor’s degree in mechanical engineering. As part of a group project for a course, he and three others designed a guardrail system for workers on elevated terrain. Able to withstand significantly more force than systems in the current market, the design took second place in the Minerva Canada James Ham Safe Design Awards.

After graduation, Nasr moved back to Oman to build and develop a vegetable oil refining plant. He later took a job as field engineer in the wire line department at Schlumberger Limited, one of the world’s largest oil and gas service providers. He spent weeks at a time in the Omani desert to evaluate areas for radioactive and explosive sources. Wanting a change of pace, he left his engineering job at Schlumberger after four years to be an assistant relationship manager at the Oman Arab Bank to manage credit facilities for a portfolio of companies.

“My time at Schlumberger was one of the most rewarding experiences I have endured,” he added. “Performing crucial reservoir evaluations in the harsh desert climates was exhilarating. I worked — under a vast amount of pressure — toward a common goal with people from many different cultures, and learned to appreciate the amenities that many take for granted.”

Having work experience in both business and engineering, Nasr sought a master’s degree so he could move up the career ladder in the industry of his choice. He applied to the Fulbright Foreign Student Program in June 2015 to pursue studies in the United States. To sharpen his skills in the interim, he participated in Harvard Business School’s HBX CORe program and took online courses in business analytics, financial accounting, and economics.

He applied to several universities of different sizes and locations throughout the U.S., but ultimately decided on Penn State Great Valley. Some of Nasr’s cousins attended Penn State, so he was familiar with the University’s name and reputation. In addition to the Fulbright grant, he also received a Chancellor’s Scholarship from the campus. He moved in August 2016, and with the help of the campus’ Enrollment and Student Services team, he quickly settled in to life in the greater Philadelphia area.

“Philadelphia is a welcoming and humbling city,” he said. “In some ways it reminds me of Muscat — full of history and culture.”

At Penn State Great Valley, he’s taken courses that blend his interests in engineering and business — statistics, technical project management, creativity and problem solving, and predictive analytics. Since Nasr is a full-time student, his course load exceeds that of an average student at Great Valley. But because of the campus’ scheduling of evening classes, he can focus on his studies during the day.

“The flexibility here is unparalleled to other universities,” he added. “I’m enjoying my courses because the professors have great industry experience and link practice to theory. I’m able to apply the lessons to my daily life — in both personal and work-related ways.”

In addition to the Master of Engineering program, Nasr is also enrolled in the campus’ Lean Six Sigma certification program that meets on Saturdays. While he plans to finish his courses in fall 2017, he is already thinking ahead to the future and is considering a career in solar energy.

“I hope to secure an internship this summer to better understand the American work culture," he said. "After graduation, I would love to partner with an American company looking to expand its business to the Middle East.” 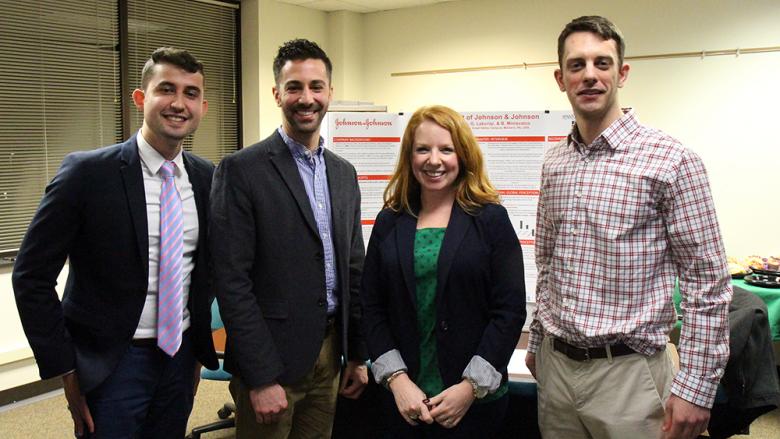