MALVERN, Pa. — Last April, Mitch Engleka was preparing for graduation while balancing an internship with an intensive capstone project for his undergraduate degree.

As a student in Penn State’s Bachelor of Engineering degree with the Multidisciplinary Engineering Design (MDE) option, Engleka took foundational coursework at Penn State Brandywine and completed the program at Penn State Great Valley in its state-of-the-art Innovation Suite. 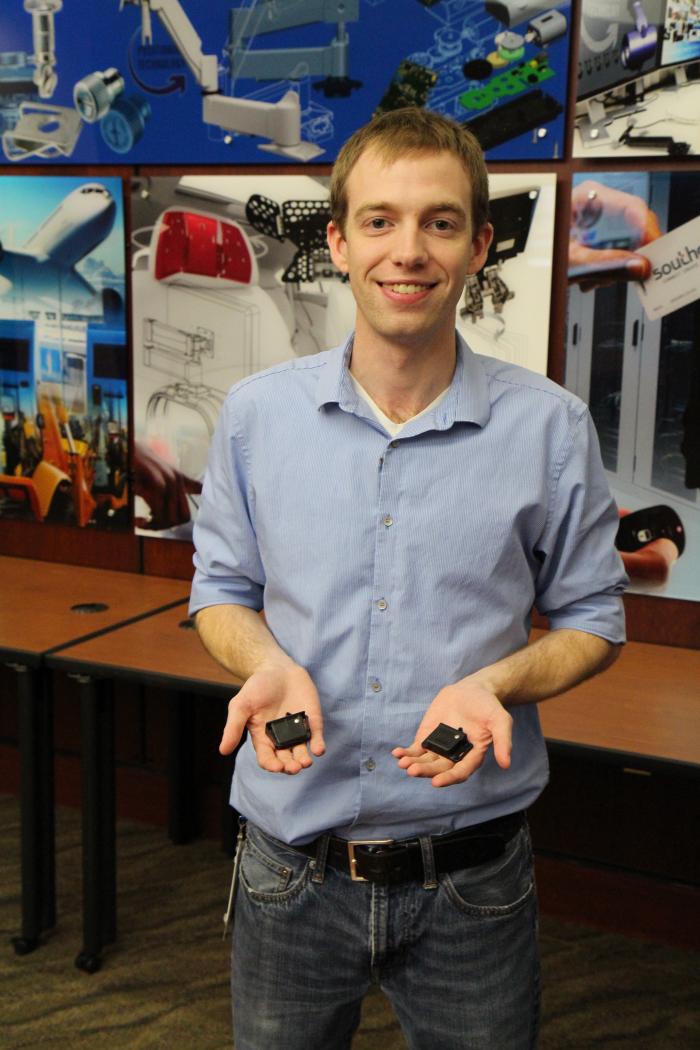 But Engleka didn’t start out at Brandywine — he transferred there from University Park, where he was pursuing a degree in mechanical engineering. He considered other programs, but ultimately chose the MDE program for its multifaceted curriculum and small class size.

“I was really drawn to the program’s multidisciplinary approach,” he said. “Classes were small, so it was easy to interact with my classmates and faculty. My professors were so flexible and could really personalize the program based on our needs and interests.”

Penn State’s MDE program provides an education grounded in engineering fundamentals as well as specialized courses in robotics, engineering design, electronics and entrepreneurship. But it is also very hands-on: There are guest lectures, field trips to engineering companies, and a required internship. The program culminates in a capstone project, where teams of students partner with an organization or startup to design a product, process or service.

On a class trip, Engleka visited Southco, a manufacturing company that creates access hardware for the transportation and electronics industries, including latches, handles and hinges. While there, he passed on his resume and landed a summer internship in the assembly department. He continued working throughout the school year, alternating days between Southco and Penn State Great Valley.

That fall, Southco partnered with Penn State to sponsor a capstone project. Engleka was put on a team of students to automate the quality check process for a sliding cabinet latch. Previously this has been done manually, which was not only tedious, but also an ergonomic safety risk. For the project, the team built an attachment that would test the strength of the latch, relying on cameras and sensors to perform the audit.

“It’s rewarding to work on a project that you know a company will use,” said Engleka. “The capstone assignment — along with my internship — prepared me for a career in manufacturing. It also taught me a lot about communication and how to work and collaborate with technical and non-technical people.”

“Southco is a terrific example of the mutual benefit of partnering with students in the MDE program,” said Sally Sue Richmond, a senior lecturer in information science at Penn State Great Valley. “Every year at least one MDE student completes a summer internship, and they often stay on part-time during their final year. Southco sponsored multiple capstone projects and they've realized increased production by implementing two of them on their production lines.”

The experience was extremely beneficial for Engleka — he received a job offer from Southco as a manufacturing engineer after graduation.

“It's wonderful to see how students grow through their interaction with Southco,” Richmond added. “They are excited to put their knowledge into action to solve real-world problems and are better prepared for the workforce as a result. And now we've come full circle. As a Southco employee, Mitch is building on the great experience and opportunity he got there when he was a student, and now he's paying it forward as a mentor of current MDE students.” 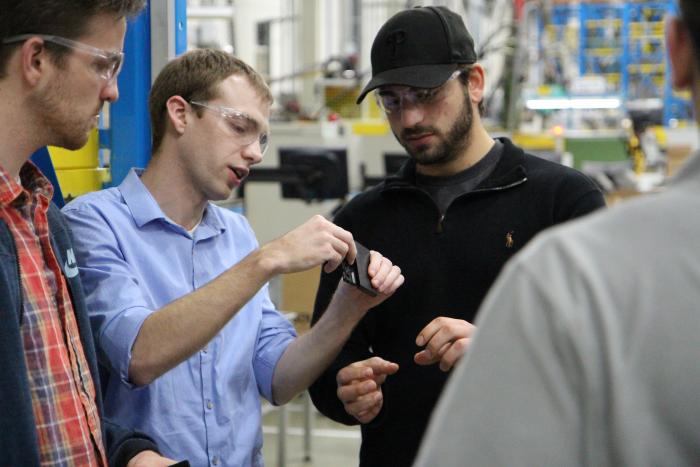 Now a manufacturing engineer at Southco, Engleka is mentoring the current MDE students as they complete their capstone project. Here, he shows students a hinge during a site visit at the company.

As this year’s students examine operations for another Southco hinge, Engleka assists students with programming machines, specifying parts, and mechanical and electrical design.

“I feel more capable now,” he said. “Rather than doing hands-on work, I’m teaching and observing. I can steer the students away from some of the pitfalls we experienced last year. As a Southco employee, it was cool to be part of the selection process and find a project that would be a good fit for the students.”

Penn State is eager to partner with companies and startups in the greater Philadelphia area for future internships and capstone projects. Interested individuals can find more information online.