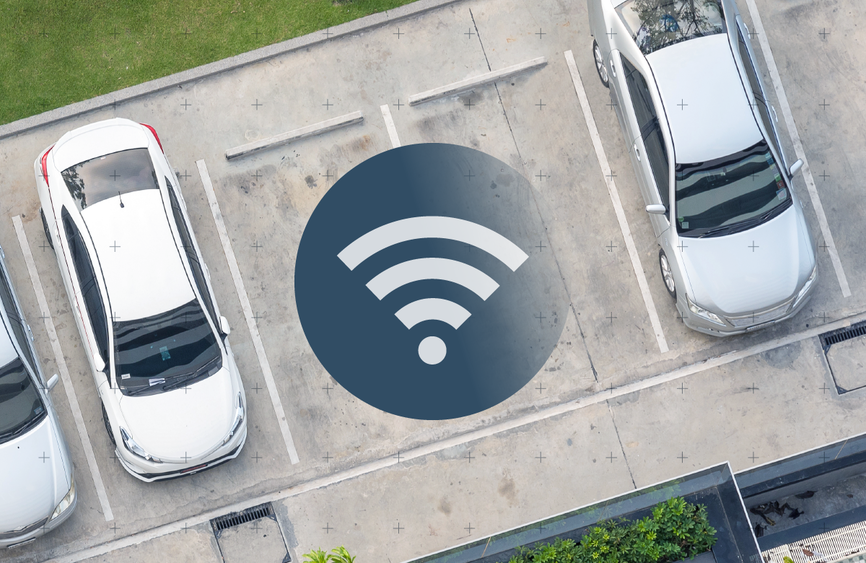 Students who live on campus can return to their dorm room as a haven during the day. Off-campus students who don't have the same option between their classes might gravitate to labs or other, often crowded, spaces to work, socialize with friends, or relax.

That was how it used to be, anyway, until social distancing disrupted routines. Finding an alternative became a priority, particularly for the Commonwealth Campuses. Team E, the University's pandemic response unit responsible for delivering creative solutions to academic- and facilities-based needs at University Park and the Commonwealth Campuses, suggested adding wireless coverage to parking lots as a potential remedy. Penn State IT Infrastructure groups quickly started planning to make it happen, setting off an aggressive timeline for completion by the state of fall 2020 classes.

The Lower Pullo Center Parking Lot, near Pullo Center at Penn State York is one of the campus locations that now has WiFi service due to a massive University-wide project to increase wireless availability. In past years, this parking lot was also used for movie night events.

Chuck Enfield, the wireless and cellular manager in Enterprise Networking & Communication Services, liked the idea but knew not every one of the 100-plus parking lots was an option. Wireless access points work through line-of-sight technology, so any lot under consideration would need two things to be considered: first, a building nearby where the device could be mounted, and second, few if any obstacles between the device and the lot that would interfere with the technology.

"Our goal was to get some coverage at every campus and do the best job we could do," he said.

To find optimal installation sites, Enfield and his team reviewed campus maps to find parking lots that met the criteria. They worked with the Office of Physical Plant (OPP) Commonwealth Services, whose facilities staff at each campus have the expertise on their buildings. Also, they did in-person visits at each campus to confirm locations and determine what hardware was needed.

During the planning process, Enfield reached out to Steven Watson, director of OPP's Planning, Design & Properties office. Watson said his office understood the urgency of the COVID-related response and worked with Enfield on required approvals and appropriate building placements in the project's tighter-than-normal timeframe.

Doug Cramer, senior architect, serves as an advocate for the integrity of the envelopes – the brick, windows, roof, and anything else that separates a building's interior from its exterior. None of the proposed solutions could negatively impact how the envelopes would perform.

"This was a unique circumstance, in respect to the pandemic," Cramer said. "They proposed multiple locations, and we reviewed them very quickly."

"We knew we didn't have time to train new contractors, so we wanted to work with contractors we normally use who are familiar with all of the campuses," Myers said. "We reached out to see what their availability would be and went with the two we felt were our best option to make the project happen."

Myers relied on Tom Macdougall to coordinate the contractors for the campuses on the eastern side of the state and Jim Delbiondo for those on the western side.

He said the biggest hurdle was the project was happening as SIMBA was going live, which impacted the purchase order process. Along with that, there was also a scramble to find all the necessary equipment. Tim Weston, ENCS inventory control distribution specialist, said although the list was extensive, the supplier turned things around quickly.

Lisa Gilson, ENCS inventory control specialist, began working with the vendor to hold the 40 outdoor access points needed while waiting for the purchase order to come through.

"Based on just a phone call, the vendor held tens of thousands of dollars of product for us. The vendor took a significant risk holding that much material for Penn State," Gilson said.

Installations began in August after the purchase orders were approved and equipment was shipped. In one case of above and beyond work, Delbiondo stepped in and drove to Pittsburgh to intercept parts from the vendor to keep contractors on schedule without any delays.

Enfield said 41 of the 42 installations were completed by the first day of the fall semester. The last one followed just one week later. He credited the hard work, cooperation, and adaptability of all the teams involved to get the job done. He said usage has varied, and the team will continue to monitor it. Cramer said OPP will continue to engage with Infrastructure, following up to assess if any refinements to locations and installs are needed.

Myers said this project had the most aggressive schedule for any project he has been involved in during his 26 years at Penn State.

"We've had plenty of rush jobs, but none that were as dependent on so many campus locations and were as high a priority," Myers said. "There were many moving parts where it could have fallen apart, but we had great leadership support to make it all happen."

These are the lots where wireless coverage was added. Lots are covered entirely, unless a building name is listed; in those cases, coverage is limited to the portion of the lot near the building.